Mykonos is one of the top tourist destinations in the world, a vibrant, fascinating and ultimately rewarding place no matter what its detractors say.
This barren, rocky island in the centre of the Cyclades has something for everybody, and its cosmopolitan atmosphere, fabulous beaches and hypnotic sunsets should not be missed.
In summer, it has the feeling of a permanent festival, but even out of the summer season, there is plenty to keep visitors occupied.

Mykonos Town is an amazing mix of a bustling harbour, narrow streets, colourful houses and windmills. The waterfront is an iconic part of the Mykonos town, where small boats mingle in the water with the seagulls and pelicans. The shoreline is full of restaurants, it is the perfect place to grab a frappe (iced coffee) and a souvlaki and watch the people wander past.

Mykonos could make an industry of people watching.
The extravagant and glamorous rub shoulders with students and backpackers, and everybody appears to get along in these narrow, cobbled streets, made by the Venetians to keep the Meltemi breeze at bay. Just beware that down any of these streets and any time of the day or night, you can encounter Petros, the pelican that wanders around, occasionally tormenting tourists.


Landmark of the cosmopolitan island of Mykonos, the white windmills and the pelicans that run freely in the streets of downtown.
More eye-catching feature is the traditional Cycladic architecture, the white square houses with mostly blue windows.
Among the locals Mykonos has a nickname: the island of winds. Therefore, the windmills that gave strong additional income in previous years, the island.
The what Mykonos is quasi famous but, is its international glamor. This popular holiday destination of many celebrities every year enjoys high reputation among actors, singers, athletes, politicians and ... homosexuals. (The latter did you know already but ...)


The first people who had lived in Mykonos, Kares (ancient Greek tribe). Its name comes from an ancient hero Mykonos with those same names. During the so-called historical times there is hardly mentions the island. But we know that it was worshiped in ancient times, especially Dionysus and his mother Semele.
During the Roman and Byzantine rule Mykonos followed the fate of the rest of Cyclades islands. After the 4th Crusade, the brothers Gkizi (close relatives of Enrico Dandolo) armies on the island were. In 1537 it was conquered along with the rest of the Cyclades from Chaitentin Barbarossa.
In the 17th and 18th centuries won significant advantages especially by Panagiotis Nikousios & Alexandros Mavrokordatos. Towards the end of the 18th century had ample naval forces, which made an important contribution to liberation from the Turkish yoke.

Of all the islands of the Cyclades Mykonos has probably the highest standards of accommodation and hotels. All hotels are generally relatively small and closely follow the architectural traditions of the island to be in symmetry with the climate. Mykonos is ... still a small island!
Consequently, we have a small selection of hotels combined, as an indication of what the island can offer.

Leave for a while Paradise and pop for a ride to Delos, according to legend the birthplace of Apollo and Artemis. Delos was one of the most important sanctuaries of Greek antiquity and the lions are still there to remind us! 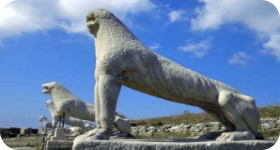 Delos. The sacred island of antiquity